The city of Palmyra in Eastern Syria is the latest site in the ancient and classical world in the Middle East to come under threat from so-called Islamic State forces.

Palmyra is in the middle of the Syrian desert, in the north-east of Damascus and contains the monumental ruins of a great city that was one of the most important cultural centres of the ancient world.

From the 1st to the 2nd century, the art and architecture of Palmyra, standing at the crossroads of several civilizations, married Graeco-Roman techniques with local traditions and Persian influences representing the epic relics of a shared human history and were of particularly special meaning to Iraqis and said to the cradle of civilization.

Check out our report on other Danger Lands in the Middle East and beyond.

The Temple of Bel, Bernard Gagnon

Aleppo, Syria’s largest city, and one of the oldest in the world, is no stranger to war and destruction.  Most recently, at the end of September 2012, much of the ancient, covered souk, extending 13 kilometres long and known to many as “The Soul of Aleppo,” is now a shell of its former bustling self after a fire destroyed the medieval buildings which once housed hundreds of  shops as the armed groups of the Free Syrian Army and the Syrian Arab Army fought for control of the city.

The souk, also a UNESCO World Heritage Site, was often recognized as being one of the most beautiful in the world and contained over 1500 shops with countless amounts of items, from spices, oils and dyes, to jewellery, silk, precious metals and everything in between.  Not only was the souk popular with the locals, but it was also a must see on many travellers’ itineraries.

Visiting Aleppo at this time is highly discouraged.  However, before the seemingly endless fighting and senseless fire that set the bazaar and surrounding monuments ablaze, the Pilot team travelled to this fascinating city to see the brighter, more vibrant days of Aleppo.

Host and traveller, Holly Morris, was fortunate enough to have Aleppo on her Syria itinerary.  Holly experienced the rich history and exquisite beauty that the trading centre represented, first-hand.  Through the alleys, stone archways and colossal wooden doors, rows of vendors were plentiful, one selling gold, another of fresh meat, textiles and even a pharmacy were permanent fixtures here, some dating back as far as the 13th Century. Holly also explored the Citadel, an ancient landmark and one of the oldest and largest castles in the world.  She then went on to visit the city of Apamea, the Dead Cities, Saladin’s Castle and eventually makes her way to capital, Damascus. 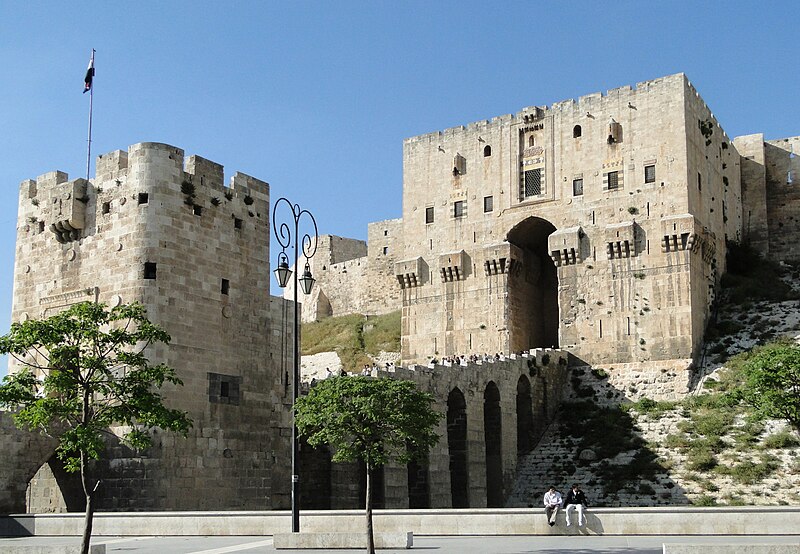 The Ancient Citadel of Aleppo – Outside its main entrance

Although the enormous destruction in Aleppo is beyond comprehension, it is still possible to rebuild and repair what has been obliterated in the flames.  It comes at no small cost, estimated at millions of dollars, but hopefully the Souk of Aleppo can flourish again and represent the city and its rich part in history that it once did.