Singaporeans are an industrious lot.  Just look at what they have achieved in their city over the past 50 years.  Impressive and quite simply spectacular buildings line their cityscape and their architects show no signs of slowing down.   I first visited in the mid 1970s and have been coming here at least twice a year since 2000. On every visit, another dizzying landmark arises, from the remarkable arts complex with its unique porcupine inspired roof or most recently, theMarina Bay shopping and casino complex,constructed on reclaimed land and home to every major design label on the planet, and along with Las Vegas and London’s Westfield projects, claims to be among the world’s most “epic indoor shopping malls!”

The Singaporeans are expert at taming this hot, tropical island that was malaria infested when Sir Stamford Raffles of the British East India Company founded a trading post here some  200 years ago. But with their latest monumental development, The Gardens by the Bay, just a short pedestrian bridge walk across the motorway from the Marina Bay complex, they may have slipped up. 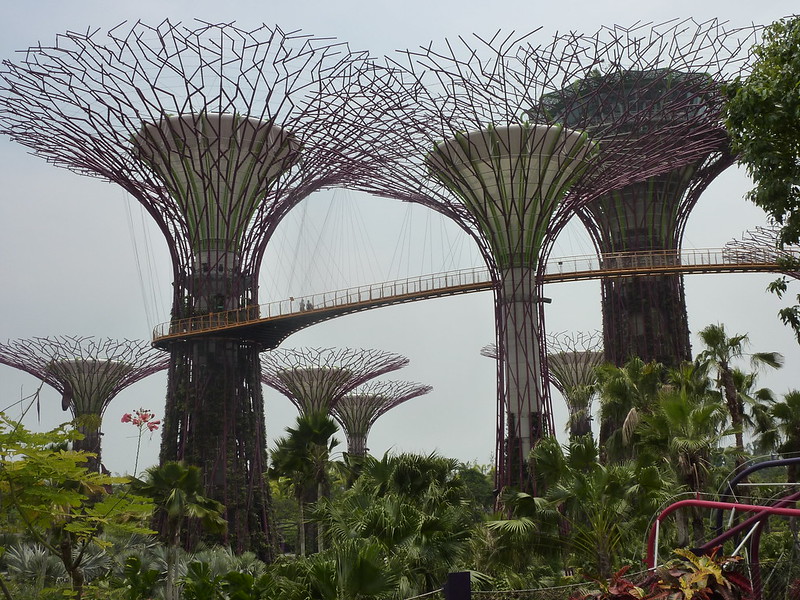 Singapore is fond of borrowing ideas from the West, particularly its former colonial master, Britain. They have erected a giant carousel wheel, a spitting image of the British Airways Millennium Wheel in London, a few years back and now The Gardens by the Bay looks very much like Singapore’s take on Britain’s Eden Project in Cornwall.

On a recent tour, it all looks a little too man made, particularly given its ecological and environmental themes. It reminded me of another British project, the ill-fated Millennium Dome. Like The Dome, The Gardens have a strong educative back story. However honourable the intentions, for The Dome it smacked of ‘’searching for a purpose”. I hope the same fate doesn’t befall The Gardens. 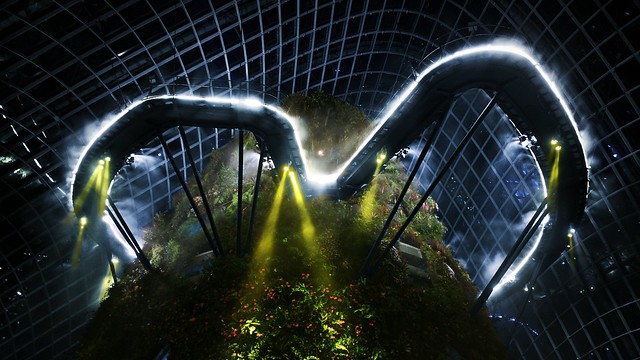 The Cloud Forest exhibit, constructed inside a gigantic sphere that has won several international architectural awards, seemed pointless – a triumph of man over nature. Give me Singapore’s excellent Botanic Gardens, at a fraction of the price, any time. The Flower Garden was more inspiring, a showcase of plants from around the word inside a giant greenhouse – a 21st Century version of the wonderful 19th century greenhouses doing the same job at Kew Gardens in London. 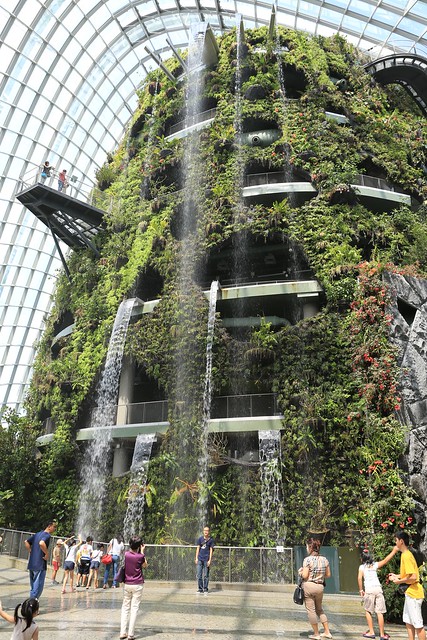 I couldn’t help thinking on leaving this giant complex with its hideous pink and purple railings and twee bunting, that this was man taming nature, not celebrating it. And Singapore is pretty good at that.