Bradley Cooper finds himself in some of the most isolated terrain in the world – the northern part of the Alaska. One third of Alaska is located above the Arctic Circle, which is quite literally, the top of the world. It’s a harsh land with no roads, a fragile ecosystem and probably some of the finest wilderness areas on earth. This isn’t a journey for the faint-hearted or for those that like to be near their creature-comforts! This is tough trekking, with wilderness camps set up hundreds of miles from civilisation. Your outdoor survival skills are put to the test here as you are flown by float plane five hundred miles north of Bettles. You’ll be left here to fend for yourself in the wild for several days, hiking over ‘tussocks’, small mounds of grassy tundra that are akin to walking on basketballs. This is a great trek but definitely one that requires preparation and an adventurous spirit!

Bradley starts his trek in the town of Bettles, population fifty. Bettles is a great place to stock up on last-minute supplies and to plan your route with the many hikers and hunters who head into the rugged Arctic terrain every summer. Bradley heads north by bush plane from Bettles for a three hour flight Northwest into no-man’s land. From the air Bradley catches a glimpse of the vastness and isolation that await him. After being dropped on an unnamed lake near the Gates of the Arctic National Park, Bradley and his two guides set up base camp in the Noatak River Valley region. They’ve checked with locals for the latest reports of where the caribou were last seen, so from here it’s a watch and wait game. Using this as a base camp, the group heads out in different directions each day searching for the caribou. A stray grizzly bear was one unexpected visitor into their camp and Bradley quickly realises that even leaving scented soap behind could invite an unwanted guest. They hike in the regions between the Noatak Coleville and Nigu Rivers skirting the edges of the Gates of the Arctic National Park in their search for the elusive caribou. After moving base camps once further up the valley, their patience is rewarded – the herd arrives and Bradley is able to see first hand the magical journey of these Nomads of the North.

The Arctic’s ecosystem is fragile. Its delicate balance of tundra, tussock plains and spruce boreal forests can be easily damaged and take years to regenerate because of the permafrost and short growing season. You should follow a policy of ‘no-trace’ hiking. Everything you bring in, must be brought out. The National Parks Service puts a six-person limit on trekking parties. Try to avoid forming trails by travelling in a fan pattern whenever possible and by never marking routes. To avoid bears becoming too friendly, it’s extremely important to pack everything away when you leave your camp during the day and at night, when you’re sleeping. Bears are drawn to smells from a long way away. All food should be hung off the ground and/or packaged in zip lock plastic bags. Toothpaste, soap hand lotions or anything with a smell are absolute no-nos in your tent! You should bury your used wash water after washing and after spitting out your toothpaste! Bears love the smell of humans, so don’t let them smell you!Packing light isn’t always an option, but you should pack only the essentials. One of the most important items is a good sleeping bag! Even in the summer, the nights can get cold, so you have to be prepared. Carry a three-season bag with a temperature range of 10 to 40 degrees Fahrenheit. A sleeping pad or even better, a self-inflating sleeping pad will make those long nights so much more comfortable. This will reduce the ground chill from sleeping just inches away from the permafrost or permanently frozen ground!

The Gates of the Arctic National Park and Preserve straddle the Arctic Divide in the Brooks Range, 200 miles north-west of Fairbanks. The entire park covers 8.4 million acres, extends 200 miles from east to west and lies totally north of the Arctic Circle.

There are an estimated six hundred thousand caribou living in 13 herds in Alaska. They’re often called the ‘Nomads of the North’ because they travel from the Interior north to the Arctic Sea, migrating hundreds of miles annually between their calving grounds, rutting areas and winter area. Caribou range in weight from 150 pounds to more than 400 pounds for a large bull. One of the greatest sights for the wildlife enthusiast has to be watching a herd of 20,000 or more caribou crossing the Noatak River in their journey southward, crossing the tundra towards the Brooks Range.

Because of the boggy ground and tussock, a good day’s travel in the Arctic will only take you five or six miles. 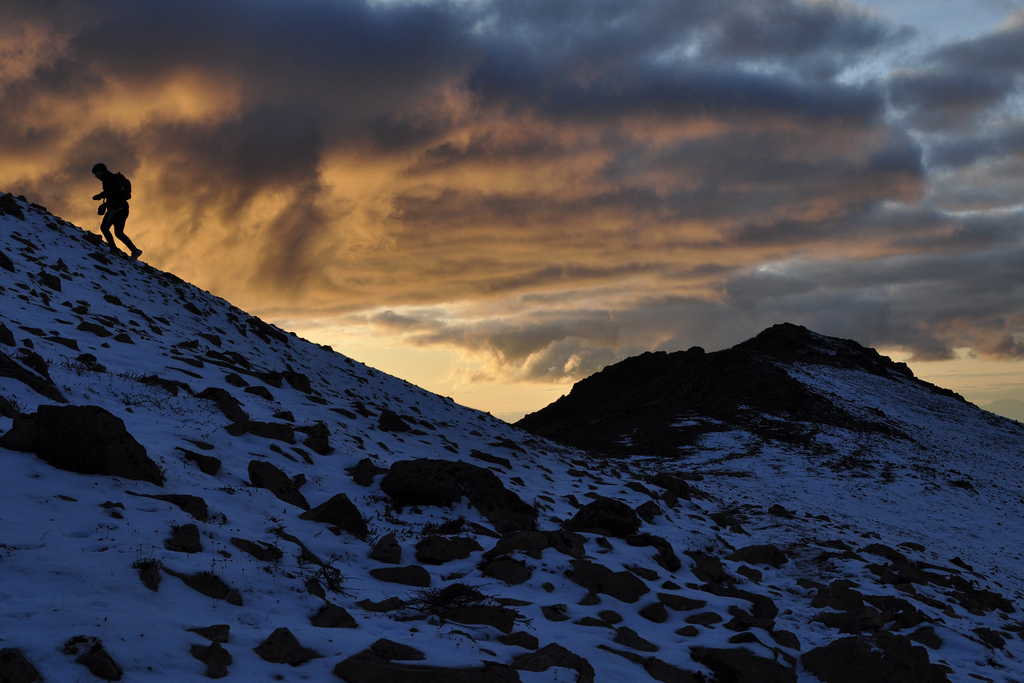