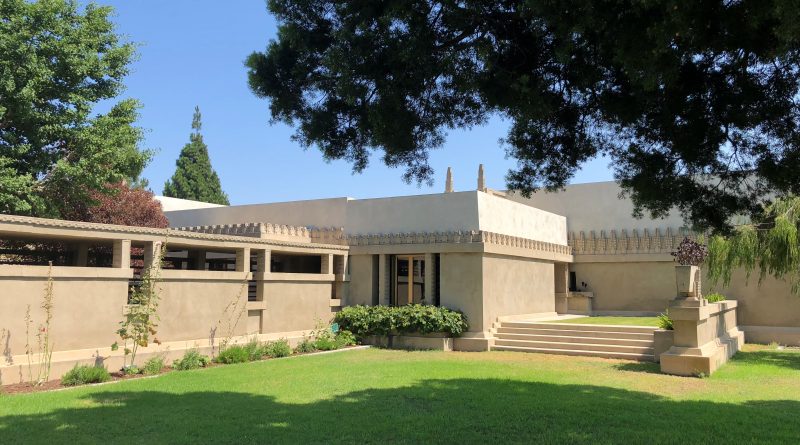 Hollyhock House in the East Hollywood, Los Angeles, built from 1919 to 1921 ,was one of Frank Lloyd  Wright’s earliest commissions, and only his second in California.

It was built for American oil heiress, Aline Barnsdall, who never actually lived in it. The building is now the centerpiece of the city’s Barnsdall Art Park.

It was donated to the City of  Los Angeles in 1927. The city  recently spent five million dollars restoring it.

As with many of Wright’s residences, it has an “introverted” exterior with small windows, and is not easy to decode from the outside. The house is arranged around a central courtyard with one side open to form a kind of theatrical stage and a complex system of split levels, steps and roof terraces around that courtyard. The design features exterior walls that are tilted back at 85 degrees (which helps provide a “Mayan” appearance sometimes referred to as the Mayan Revival style), leaded art glass in the windows, a grand fireplace with a large abstract bas-relief, and a moat.

The hollyhock plant common in the area is used as a central theme to  the design .An interesting feature is the glass corners, an early Wright idea later used at Fallingwater.

Like many houses designed by Wright, it proved to be better as an aesthetic work than as a livable dwelling. Water tended to flow over the central lawn and into the living room, and the flat roof terraces were conceived without an understanding of Los Angeles’ rains. The cantilevered concrete also has not stood up well to the area’s earthquakes.