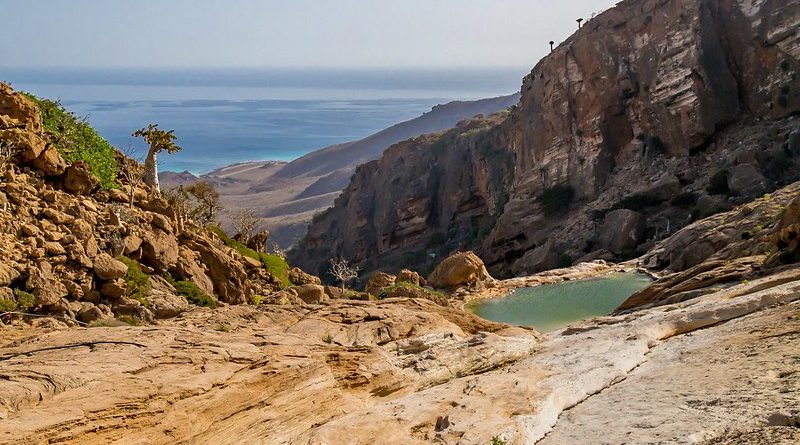 Sadly better known for its rampant poverty and the ongoing political unrest and civil conflict within its borders, Yemen is nonetheless a country with a rich and extensive history spanning several millennia. With few ruling elites able to exert lasting influence, the country has subsequently been left with a diverse cultural history, something which is clear to those who visit it.

One of the most fascinating locations on the planet, Socotra Island has often been described as the ‘most alien-looking place on earth’. When one visits the archipelago, it is easy to see why. Incredibly isolated, Socotra is known for the plethora of species endemic to the island. A massive third of the islands’ plant life can only be found there. The fascinating flora is complimented by spectacular, awe-inspiring scenery. Socotra is truly one of the most unique and special places in the world.

One of the country’s most iconic buildings, the Dar al-Hajar Palace is one of the more visually striking castles one would see, a stark contrast from the conventional Western incarnation. Built in the 1930’s on the orders of the country’s leader Yahya Muhammad Hamiddi as a summer residence, it was converted into a museum after his assassination in 1948. Its striking exterior, which gives the impression that it was carved into the rocks upon which it rests, is almost otherworldly.

A small, remote city dating back to the 3rd Century, Shibam is known for its distinct and revered architectural identiry. The city is practically synonymous with its many high rise buildings, comprised from mud brick. Designated a UNESCO World Heritage Site for these buildings, Shibam has sometimes been termed the ‘oldest skyscraper city in the world’, its buildings an important progenitor to the high-rise apartment buildings commonplace around the world today. Shim is one of the world’s most significant and influential cities in the history of urban planning.

One of the most spectacular and unique sites in the country, Shaharah is also one of the country’s most remote villages. Its remote, mountainous surroundings made it an ideal location for a fortress, and it remained unbreached until well into the 20th Century during the Yemeni Civil War. While accessibility to the site is generally prohibited due to unrest in the region, it remains one of the country’s most amazing destinations.

While conflicting reports have created some confusion over the matter, it is believed that this site was destroyed as tensions escalated during 2015. However, there is little clarification about the extent of the damage. Regardless of its current status, Cairo Castle was undoubtedly one of the country’s most impressive structures. Dating back to the early 12th Century, the castle was built under the orders of Sultan And Allah ibn Muhammad al-Sulayhi. Situated upon a hilltop, the Castle was known for its beautiful gardens. Despite the uncertainty regarding its current status, the castle was one of the country’s most iconic symbols

A symbol of modern Yemen, Al Saleh Mosque is barely a decade old. Located in the city’s capital of Sana’a, the mosque is notable in its accessibility to non-Muslims and its adherence to moderate Islam. Often termed ‘The People’s Mosque’ in recent years, this new name reflects the more open, moderate Muslim values that the mosque attempts to promote and the ideal of a more peaceful Yemen.

A key part of the Old City of Sana’a, the Great Mosque is one of the oldest buildings of its kind in the city. Allegedly built as early as the 7th Century from the remains of the Ghumdan Palace, the Great Mosque is arguably the country’s most significant religious building. It is believed that the mosque dates back to the time of the prophet Mohammad, who according to verifiable Islamic scriptures, played a key role in its establishment. Its extensive historical and cultural significance makes it a key sight in the Yemeni capital.

Arguably the oldest relics found in the country, these tombs are scattered but the best known are in or around the city’s capital city of Sana’ These stone tombs can be dated back to the Palaeolithic Era, as old as 40,000 years. Inhabited by ancient cultures lost to the ravages of time, these tombs are amongst the country’s most unique sites.

Literally translated to the ‘Gate of Yemen’, as its name suggests the Bab al-Yaman is the long-serving gate of the country’s walled capital city Sana’ Having gone through numerous incarnations over the city’s extensive history, its current iteration was designed and built during Ottoman rule in the 17th Century. A key part of the Old City of Sana’a, Bab al-Yemen is a fine example of Yemeni architecture and one of the country’s most recognisable landmarks

Located on the island of the same name off the coast of the city of Aden, Sira Fortress has played a significant role in Yemen’s military history for centuries. One of Yemen’s most mysterious sites, little is known about the fort’s origins due to sparse excavations taking place. It is commonly believed however that the fortress was built during a period of Ottoman rule over the region. The site remains an important base of the Yemeni military today.