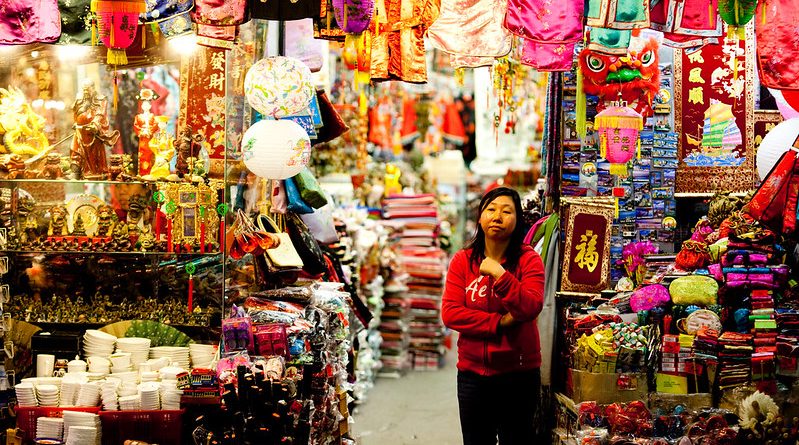 Although Singapore’s main ethnic population is Chinese, the city state’s Chinatown has a rich cultural history and is among the most prolific in the world. Indeed, significant portions have been deemed national heritage sites, a sign of its importance to Singaporean identity. Originally established as a part of the Raffles Plan of Singapore, the Chinatown was intended to house the colony’s Chinese population.

Interestingly, Chinatown is also a very important site for the Singaporean Indian community, with the Sri Mariamman Hindu Tamil Temple and several mosques all nestling in the heart of the district, reinforcing the community’s reputation as a cosmopolitan enclave. Architecturally, Chinatown reflects the coalescence of Eastern and Western culture for which Singapore is famous, containing a mix of baroque, Victorian and Oriental buildings. The largest Asian community outside of Asia and arguably the most famous Chinatown in the world, San Francisco’s Chinese community is one of the city’s main tourist attractions, North America’s oldest Chinatown, the community has endured through earthquakes, bubonic plagues and westernification, remaining an immersive cultural institution.

Viewed as very important in the assimilation of Chinese immigrants into the North American continent, the San Francisco Chinatown can feel like a city of its own, with several Chinese staples such as temples, pagodas and herbal shops. Yet despite sometimes feeling like a microcosm of an Asian society, the community’s vibrant soul is embedded deep in the heart of the city, drawing more tourists than the city’s spectacular Golden Gate Bridge and serving as a source of pride for the city residents and Chinese Americans across the country.

The British capital’s Chinatown has seen a shift of location during its 100 year existence. Initially based in the Limehouse district of London’s East End, where the Chinese population was concentrated due to its close proximity to the docklands, it moved to its current location in the heart of Central London in Soho. Although the original Chinatown was discredited amongst the general public through embellishments, which exaggerated the district’s copious opium dens and slums, as the population became increasingly assimilated into British culture and moved into Soho, London’s Chinatown became immensely popular with residents from all backgrounds, particularly following the Second World War when Chinese food became popular.

London’s Chinatown today houses nearly 100 restaurants, many of which are considered to be among the country’s most authentic and delicious Asian eateries.

In the heart of Sydney’s Central Business District, this Chinatown contrasts with many of its foreign counterparts in that crime and health issues are minimal. In spite of their persecution in the early days of Australia (particularly in the Gold Rush), relations between the two have warmed considerably due to the massive Chinese population in Australia.

Although there are several traditional Chinese restaurants and specialty shops in the Sydney Chinatown, it also has a sleeker, more contemporary vibe than many of its counterparts. Indeed, the surroundings are marked with skyscrapers and there are several upmarket Western shopping malls and restaurants. Yet the Chinese influence can be felt all over Sydney, with smaller satellite Chinatowns having sprung up recently in more suburban communities such as Paramatta, Eastwood and Hurtsville.

In addition, on the outskirts of Chinatown next to Sydney’s Darling Harbour is the Chinese Garden of Friendship, constructed during Sydney’s bicentennial celebrations as a commemoration of the strong bond between the two nations. Due to the city’s immense size and ethnic diversity, there are actually several Chinatowns in New York City. The most famous and large however, is the one on Manhattan’s Lower East Side. The largest community of Chinese people in the Western Hemisphere, Manhattan’s Chinatown has an estimated population of nearly 100,000 people. Although the famous Chinese businessman Ah Ken was the self-proclaimed first resident of Chinatown in the 1840s, mass Chinese immigration did not begin in earnest until the 1870s when, due to an immigration ban imposed on America’s West Coast, they turned their fortunes to the city’s on the country’s Eastern Seaboard.

Gradually, as immigrants formed small businesses such as eateries and launderettes, Chinatown grew and grew. The big tipping point did not come until the US passed the Immigration and Nationality Act of 1965, which saw a massive influx of Asian immigrants. The region thrived throughout the latter half of the 20th Century, with luxury condominiums replacing many of the tenements, which used to be synonymous with the area.

More recently, due to the rising housing prices in Manhattan, the Chinese community has spread across the city to more affordable regions such as Brooklyn and Harlem, where smaller Chinatowns have formed. Restaurants, Green Grocers, Herbal shops, Fishmongers are clustered all over Chinatown while cultural institutions like the Church of the Transfiguration are also prominent within the community. Locally known as Binondo, Manila’s Chinatown is the oldest in the world, established in 1594. Founded when the Phillipines was under Spanish rule, the community was created to house Chinese settlers who had converted to Catholicism. The Chinese population gradually grew and expanded despite the lack of female Chinese immigrants and the Spanish practice of executing the Chinese who would not convert. Indeed, the population grew large enough to stage a revolt in 1603 against the Spanish, which was eventually crushed, resulting in nearly 20,000 Chinese losing their lives.

The community has had a somewhat turbulent history since then, devastated during the British occupation of Manila in the 18th Century but eventually transitioning into the city’s financial hub for industries such as banking before the Second World War. Although much of the Chinese population relocated to the more developed area Makati, Binondo retains its cultural charms and heritage while land value in the area is among the highest in the entire Philippines. One of the entrances to Ongpin near the Carriedo Fountain Santa Cruz, Manila – By Gino Mempin, Flickr

Now one of the city’s major tourist attractions, Melbourne’s Chinatown has a long and turbulent history dating back to the Gold Rush of the 1850s. Settling in Melbourne, a small community began to form in what is now the CBD, and Chinese businesses began to sprout. Western residents viewed them in an unsavoury light, associating the Chinese community with opium dens and brothels. While there was a huge influx of Chinese immigrants seeking their fortunes at this time, they endured harsh treatment, which culminated in the 1901 Immigration Restriction Act. Subsequently, Melbourne’s Chinese community’s assimilation was significantly hampered.

Despite this, the population continued to grow within the city as Chinese culture and cuisine became popular within Australia. The first half of the twentieth century saw a number of key developments, including the invention of the popular Chinese snack the Dim Sum in Melbourne’s Chinatown and the area’s redevelopment during the 1930’s, which saw the construction of the iconic arches, both of which contributed to the community’s burgeoning popularity in Melbourne.

In the 1960s and 1970s, once the prejudiced immigration policies were removed, Melbourne’s Chinatown continued to grow and institutes such as the Chinese Museum were established. In modern times, Chinatown is one of Melbourne’s most thriving areas, with major festivals such as Chinese New Year and the Asian Food Festival now signifying how interwoven into the city’s cultural fabric Chinatown has become. One of North America’s largest and most popular Chinatowns, Vancouver’s Chinese Community has seen a great deal of change over its long history, with immigrants gradually dispersed across the city. Once known for its spectacular neon signs such as the Ho Ho sign, which gave it a unique sense of character, the area has seen economic revitalization over the past few years with several luxury apartments being recently constructed.

Vancouver’s Chinatown still retains some of its traditional charms however, and is home to many eateries, herbal shops and tea houses. As the Chinese community in Vancouver became increasingly assimilated however, several new Oriental neighborhoods have sprouted within the Greater Vancouver Metropolitan Area, most notably the area Richmond, where 60% of the population is Asian-Canadian, making it North America’s second largest Asian community.

In contrast to Downtown Vancouver’s Chinatown, Richmond has a far more modern feel. Colloquially nicknamed the Golden Village, it is home to Asian-themed shopping malls and is generally a very wealthy area. Some however have criticized it, believing its boom to be responsible for the perceived exodus of Chinese immigrants from the Downtown Chinatown.

The capital of the Malaysian Island Penang, Georgetown is a vibrant melting pot of cultures, with Chinese, Indian, Muslim and British influences continuing to resonate today. Despite its quiet façade, reinforced by strict observances of religious holidays by its multicultural inhabitants, the town is known as one of Asia’s cuisine capitals. It is famous for its Chinese Dim Sum stalls in the early hours of the morning as well as the diverse food stalls, which come to life in the evenings.

Although the Chinatown in Penang is not as well known or conventional as its foreign counterparts, the Chinese presence is nonetheless keenly felt, with some of the world’s finest and most authentic Chinese cuisine available here. In addition, there are several spectacular temples, including  the Hainanese Temple and the Kuan Yin Teng (Goddess of Mercy Temple). The architecture is equally unique, with Chinese pagodas and the shophouses dating back from Penang’s time under British rule all remaining intact, thus making Georgetown one of the world’s most vibrant and unique communities in the world.

The Peruvian capital’s Chinatown, known in Lima as Barrio Chino, has a long and somewhat troubled history. Beginning in the 1850s, Chinese immigrants began to settle in Lima. The population grew to such an extent that various Chinese establishments such as schools were established. However, the neighborhood descended into degradation as a result of the War of the Pacific as well as the harsh ban on Chinese immigration, which lasted several years. In the long-term however, this only helped the Chinese immigrants’ assimilation into Peruvian society, as they would intermarry with Peruvian natives and move further inland.

When the ban ended in the 1970s, a rejuvenation of sorts was undertaken within Barrio Chino, and it continues to be a thriving community. Several restaurants, temples and establishments are scattered across the area while the first ever Chinese-language newspaper in the Americas ‘Man Chin Po’ originated in Lima. 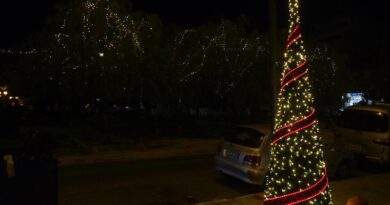 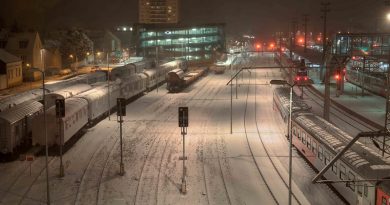 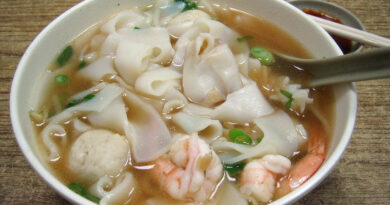 The Food of China